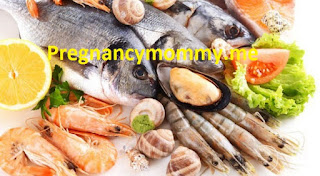 Hi Mommy, Welcome to PregnancyMommy. This time we will discuss about Eat Seafood While Pregnant, May or Not?, hopefully the article we wrote can be useful for Mommy.

Many people may still have confidence in some foods to avoid while pregnant, such as fish. Some people believe that eating fish while pregnant will make the child smell fishy. However, it is simply a hereditary belief that cannot be scientifically proven. Scientifically, fish is precisely needed while pregnant as an indispensable source of protein for fetal growth and development.

There are indeed several types of fish that must be limited in consumption. This is because certain types of fish contain high mercury that can harm the fetus, not because fish cause fishy odors. In addition, how to cook fish should also be considered. Pregnant women should avoid eating raw fish or perfectly immature fish because it may still contain bacteria that can harm the fetus and pregnant women.
Can I eat seafood while pregnant?

In addition, seafood also contains omega-3 fatty acids, including dokosaheksanoic acid (DHA), which is indispensable for the development of the baby's brain, especially in the third trimester where the growth of the baby's brain takes place very quickly. Omega-3s in seafood can also reduce bleeding and the risk of babies being born prematurely. A fish-rich diet can also lower the risk of heart disease by reducing blood clots and triglyceride (blood fat) levels as well as lowering blood pressure if you have pre-existing high blood pressure.

But some types of seafood, such as predatory fish, contain high levels of mercury. Mercury can accumulate in your bloodstream over time. Too much mercury in the bloodstream can damage the development of the baby's brain and nervous system. Therefore, choose a type of seafood that does not contain high mercury, especially when pregnant.

The American Food and Drug Administration (FDA) recommends pregnant women eat at least 8 -12 ounces (340 grams) or about 2-3 servings per week of various types of low-mercury seafood.

What kind of seafood should pregnant women avoid?

Read Also : 7 Foods That Must Be Consumed By Pregnant Women, So Healthy and Smart

The types of seafood that should be avoided are sharks, swordfish, king mackerel, tilefish, marlin, and raw fish, such as in sushi and sashimi.
How to eat seafood safely during pregnancy?

Some tips to still be able to eat seafood safely during pregnancy, among others:

Choose fresh fish of good quality with the characteristics of having clear eyes, whole scales, the aroma of fresh brine, chewy meat or reappear after pressing, cold temperature (below 4° C) with no ice crystals. Put the fish in the freezer if it is not cooked immediately.