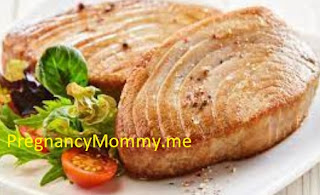 Hi Mommy, Welcome to PregnancyMommy. This time we will discuss about Is It Safe to Eat Tuna During Early Pregnancy?, hopefully the article we wrote can be useful for Mommy.

First off, if you're expecting a baby, congratulations. And congratulations for taking the time to study about nutrition and what are the best foods to eat while you're pregnant. There has been a lot of talk about seafood during pregnancy and it has lead to a lot of confusion on this topic. Among the multitude of questions surrounding seafood, many people want to know can pregnant women eat tuna, one of the more popular seafood choices for many populations.

The concerns stem from harvesting fish from polluted waters. These fish are feared to have been contaminated with high levels of mercury and other heavy metals. Currently the EPA and FDA don't include tuna on their list of fish to avoid during pregnancy, but they do say to eat no more than 12 ounces each week. These recommendations seem to have come from bad, old science.

First off, there are no documented cases of Americans developing mercury poisoning from eating fish. On top of that, the American government's recommendations were based on a single study which involved eating whale meat, not fish, and the researches behind that study acknowledge only positive health benefits for mothers and small children who eat fish.

Recomended for Mommy : Is It Safe to Eat Imitation Crab During Pregnancy?

It turns out that the mercury scare has been fairly overhyped. Because of these concerns, many women stopped eating seafood during pregnancy at all. For lower income women this was extremely detrimental as canned tuna was their only access to affordable Omega-3 fats that are so crucial to the fetus's brain development. Research has shown that pregnant women who eat many servings of fish with high levels of Omega-3's (particularly salmon and sardines) produce children with higher IQ's then their non-seafood consuming counterparts. There has also been a link shown that eating those same fish, because of the Omega-3's, reduces the risk of post-partum depression.

What baffles me is seeing pregnant women unabashedly swear off any type of seafood, then load up fast food, fried snacks, and ice cream with the appalling statement, "I'm eating for two now so I've gotta take advantage of it while I can, right?" The dangers of these food for the mother's and the baby's long term health have been well established without any controversy. The health benefits of eating tuna during pregnancy have been well established. Can pregnant women eat tuna is not even open for discussion any more. They should eat tuna.
Tuna
Next Post Previous Post
No Comment
Add Comment
comment url
Pregnancy,Pregnant,Seafood,Tuna