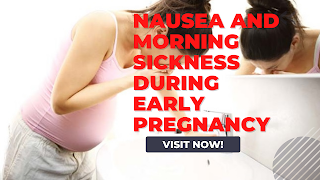 Nausea during early pregnancy, also called morning sickness, might be a good sign. Studies have shown that women with nausea and vomiting during the first trimester have a lower risk of miscarriage than do women without these symptoms.
Hi Mommy, Welcome to PregnancyMommy. This time we will discuss about Nausea and Morning Sickness During Early Pregnancy, hopefully the article we wrote can be useful for Mommy

What's the connection? Nausea and vomiting during early pregnancy might indicate you are experiencing the climb in hormones needed for a healthy pregnancy.

Research suggests that nausea and vomiting during pregnancy might be due to the effects of a hormone produced by the placenta called human chorionic gonadotropin (HCG). Pregnant women begin producing HCG shortly after a fertilized egg attaches to the uterine lining. Women with severe morning sickness (hyperemesis gravidarum) have higher HCG levels than other pregnant women do. Women pregnant with twins or multiples also have higher HCG levels and are more likely to experience morning sickness. Similarly, estrogen, another hormone that increases during pregnancy, is associated with an increase in the severity of nausea and vomiting during pregnancy.

When does morning sickness start?
Morning sickness symptoms typically start around week 6 of pregnancy towards the middle of month 2. No wonder it's one of the first telltale signs you're expecting — that's only a week after your hCG hormone levels have risen enough to produce a positive pregnancy test!

Some moms find that the nausea kicks in a little later between weeks 7 to 9, but luckily this not-so-fun pregnancy symptom usually disappears around the beginning of the second trimester.

How long does morning sickness last?
For the vast majority of expectant moms, nausea and vomiting typically subside between weeks 12 and 16 of pregnancy, with symptoms at their worst from weeks 10 to 16.

That said, a few women continue to experience symptoms into the second trimester. And a very few, particularly those expecting multiples, may suffer from some morning sickness throughout their pregnancies.

Foods for morning sickness
A pregnancy diet that's high in protein and complex carbohydrates is not only good for baby, it can also help keep nausea at bay. Think whole grain toast and peanut butter, or hard cheese and crackers. Steer clear of greasy and processed fast foods, which are hard to digest and can make morning sickness worse.

Wondering what to eat for morning sickness? A few of the best foods when you’re nauseous and vomiting during pregnancy include:

Bland, easy-to-digest solids. Bananas, toast, rice, pretzels and applesauce are relatively palatable foods that may help you fit in some calories.

Almond milk. A glass of cold almond milk has been touted to help settle an upset stomach and quell heartburn.

Soups, smoothies and shakes. It’s often easier to drink your vitamins and nutrients, especially if the liquid’s icy-cold. If you can’t stand water, try sucking on a Popsicle for hydration.

Carbonated drinks and some herbal teas. Getting enough fluids is more important than eating early on in pregnancy. You might find a carbonated drink or some types of pregnancy-safe herbal tea (especially with lemon or ginger) helpful when it comes to easing nausea. If drinking and eating at the same time strains your digestive tract, sip on fluids between meals.

Water-packed fruits and veggies. If fluids make you queasier, try eating solids with a high water content. Melons are often a good choice.

Ginger. Numerous studies have shown that ginger really does reduce nausea and vomiting in pregnancy. You may find even the smell of fresh ginger calms an upset stomach. Stock up on staples made with real ginger (check the label; many prepared foods don’t contain the real deal), such as ginger snaps, ginger ale, ginger tea, ginger candies, ginger biscuits or crystallized ginger. Use fresh ginger when you’re cooking (in soup or stir fry, for example), or add it to your tea.

Citrus fruit. Many people find the smell and taste of lemons and oranges comforting during pregnancy. Sour sucking candies or a sniff of freshly-cut lemon may be your ticket to relief.

A few other mealtime tips can help reduce nausea and vomiting during pregnancy:

Eat early
Nausea is most likely to strike when your stomach is empty, like it is following a night’s sleep. The acids churning around inside an empty tummy have nothing to digest but your stomach lining, which increases queasiness.
Stock your nightstand full of trail mix, crackers and cereal. Munch on your stash first thing in the morning or if you wake up in the middle of the night to pee.

Have a bite right before bed
For the same reason that you want to eat early, it’s a good idea to have a light snack that's high in protein and complex carbs right before you go to sleep. Try whole grain toast spread with peanut butter or a slice of cheese with a handful of dried fruit.

Plan small, frequent meals
You’re more likely to feel nauseous when your tummy's empty. But eating too much at once can also contribute to queasiness.

Try the Goldilocks rule: Don't overfill your belly, but don't let it get completely empty. Instead, keep your stomach a little bit filled all the time.

Because smaller meals are easier to digest, they’re less likely to trigger both the queasies and heartburn. Aim for six mini-meals throughout the day rather than three large ones.

Keep a stash of on-the-go snacks
Don’t leave your house without a healthy stash of snacks that your tummy can handle. Pack a bag of dried fruit and nuts, granola bars, protein bars, dry cereal, whole grain crackers or soy chips in your bag so you’re prepared anytime you’re out.

Skip foods that turn you green
Avoid eating, seeing, smelling or even thinking about any dishes that trigger the queasies. Spicy and acidic foods may be particularly challenging, as well as anything with a strong aroma.

Stick to foods that appeal to you
Chances are you'll be able to find a few healthy foods that you can keep down. They’ll take care of most of your nutritional requirements until a more varied diet becomes palatable.

Remember that no one food has a monopoly on any particular nutrient or meal. For example, you can get your vitamin A and protein from peaches and yogurt at dinner instead of broccoli and chicken. Or have pasta for breakfast instead of cereal.

Don't worry too much about getting your daily dozen in the short term. There will be plenty of time later on in your pregnancy for eating well.

Couldn’t get enough bread at the start of your pregnancy, but now can’t stand the sight of toast?

Sometimes what starts out as a comfort food can become associated with nausea and trigger the queasies. Try a similar-but-different-enough comfort food instead, like crackers.

It's also possible that nausea and vomiting during pregnancy are signs of viable placental tissue.

Keep in mind, however, that a lack of nausea and vomiting during pregnancy isn't cause for concern. Some women with healthy pregnancies never experience morning sickness.